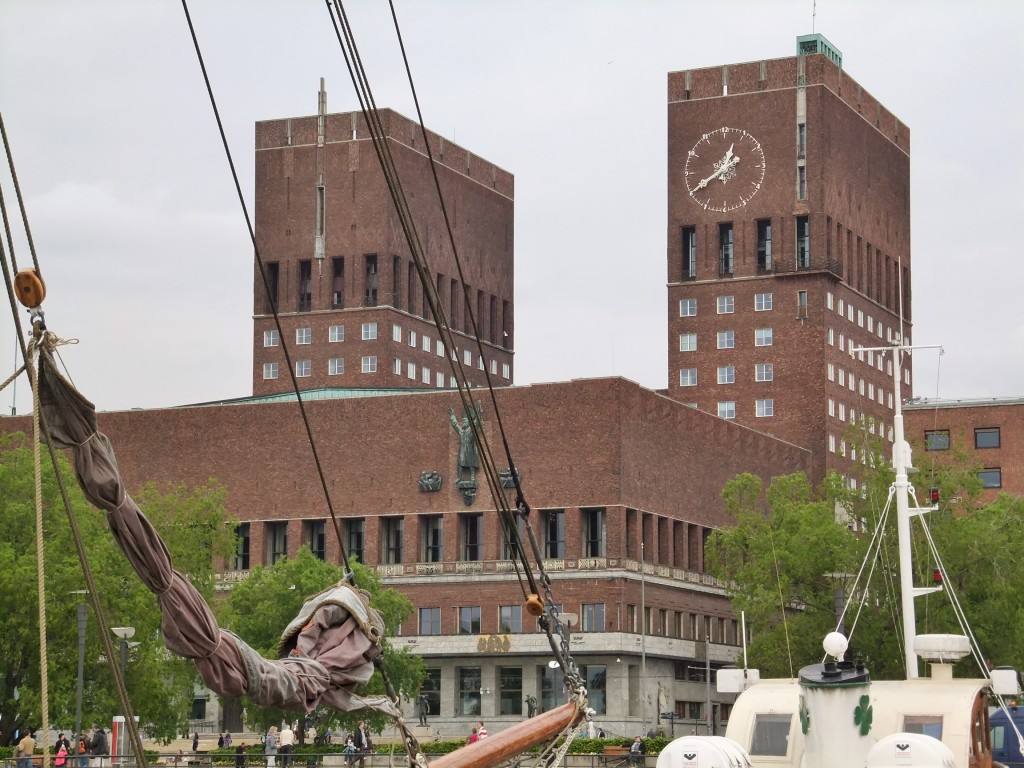 Iconic modern architecture has added a new reason to visit Oslo:
the Opera House, the Astrup Fearnley Museum of modern art, as well as the new Edvard Munch museum 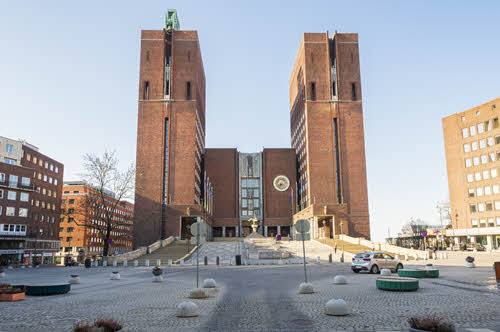 – a well known landmark in Oslo – inaugurated in 1950, with a brick facade, the characteristic, two tall towers and an enormous clock on the city side, decorated with historical themes. The interior is decorated by famous Norwegian artists. The City Hall is overlooking the main waterfront of Oslo.

Edvard Munch painting: In the so-called Munch room in Oslo City Hall, you will find a large painting by Edvard Munch entitled Life. 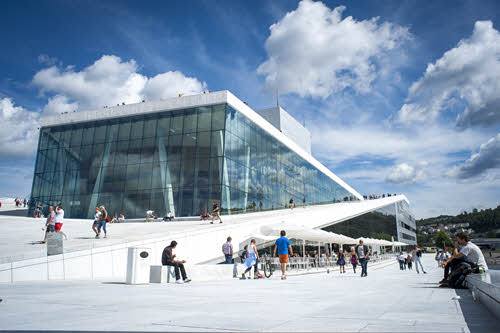 – beautifully located in the Bjorvika part of the waterfront, close to the Oslo central train station (Oslo S). This exceptional building was designed by the Norwegian architects of Snohetta, who also designed the amazing library in Alexandria, Egypt.
About the Oslo Opera House
See more amazing projects from Snohetta (external link) 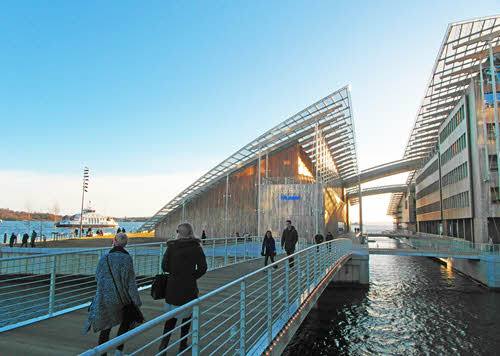 of Contemporary Art, designed by the Italian architect Renzo Piano, is a wonderful wooden construction consisting of two buildings linked together with roof bridges – separated by a spectacular canal, with a tiny beach and a tiny sculpture/art park.
The museum is beautifully located at the far end of the Aker Brygge/Tjuvholmen waterfront, by the Oslofjord – a vibrant pedestrian area with restaurants, cafés, shops and bars.
The iconic Astrup Fearnley Museum 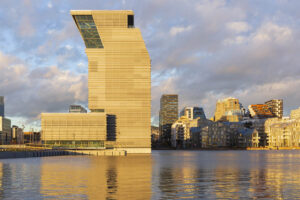 – called “Lambda”
With cladding in recycled, perforated and partially translucent aluminium panels and its characteristic leaning top section, the museum has become a new landmark in Oslo.

The museum is located in the Bjorvika waterfront area – with modern buildings, restaurants & easy access to the seashore. It is located a short walk from Oslo central train station 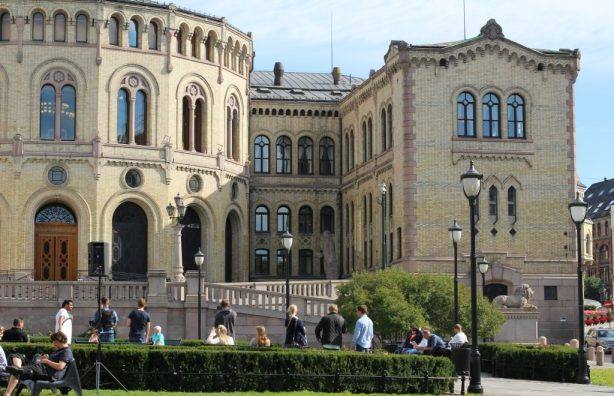 Stortinget in Norwegian
– designed by the Swedish architect Emil Victor Langlet, is built in yellow brick with details and basement in light gray granite. It is a combination of several styles, including inspirations from France and Italy.
The building was finished in 1866.
The Parliament building has a central location in Karl Johans gate main street 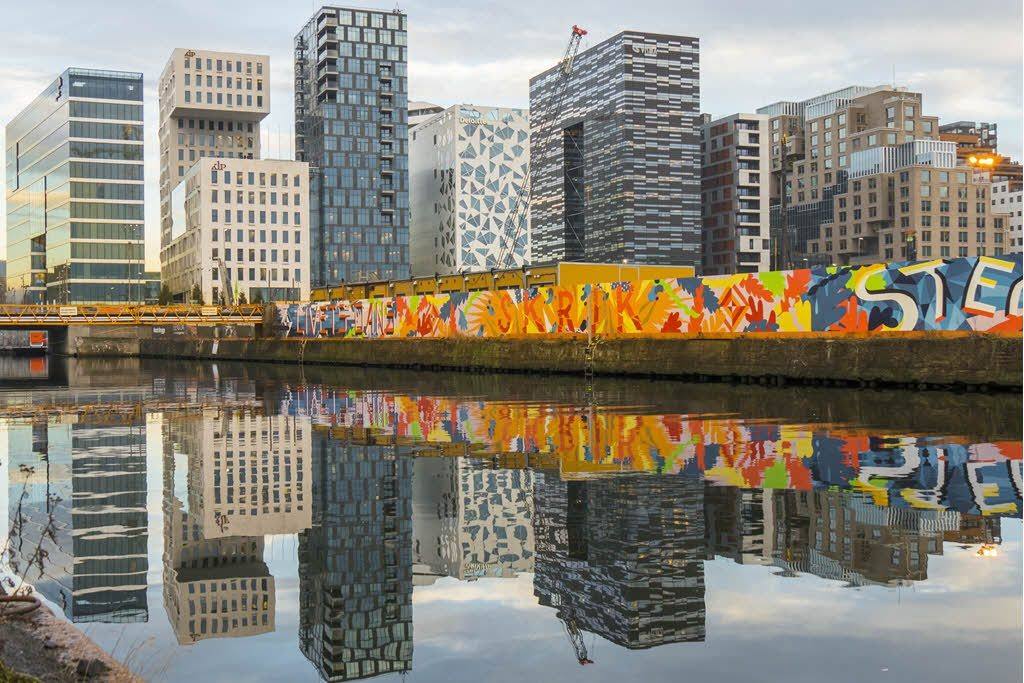 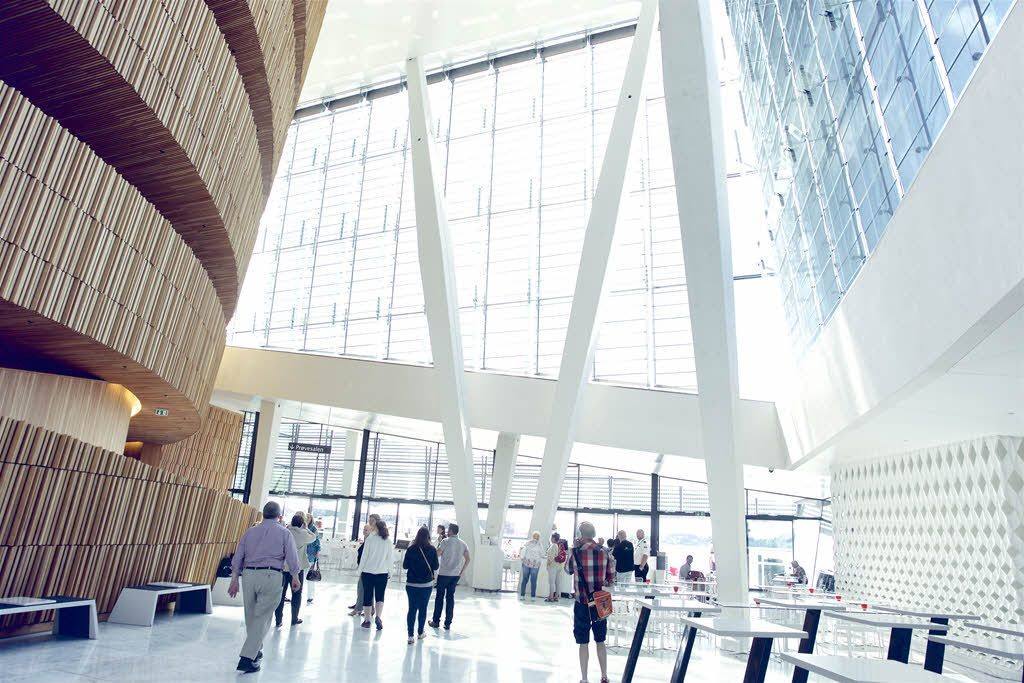 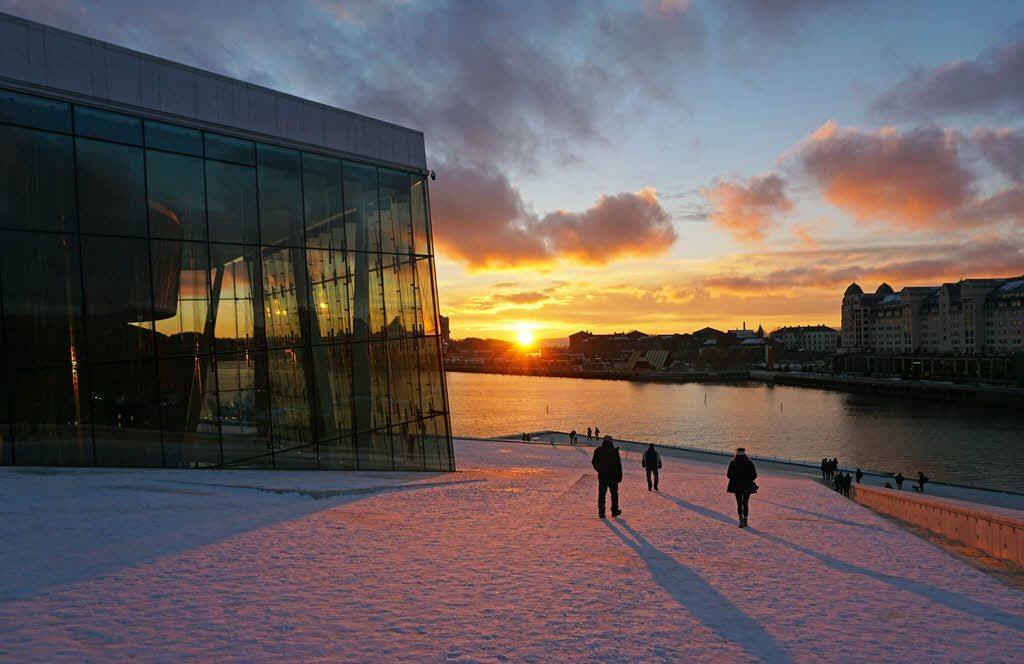 Sunset at the Opera roof 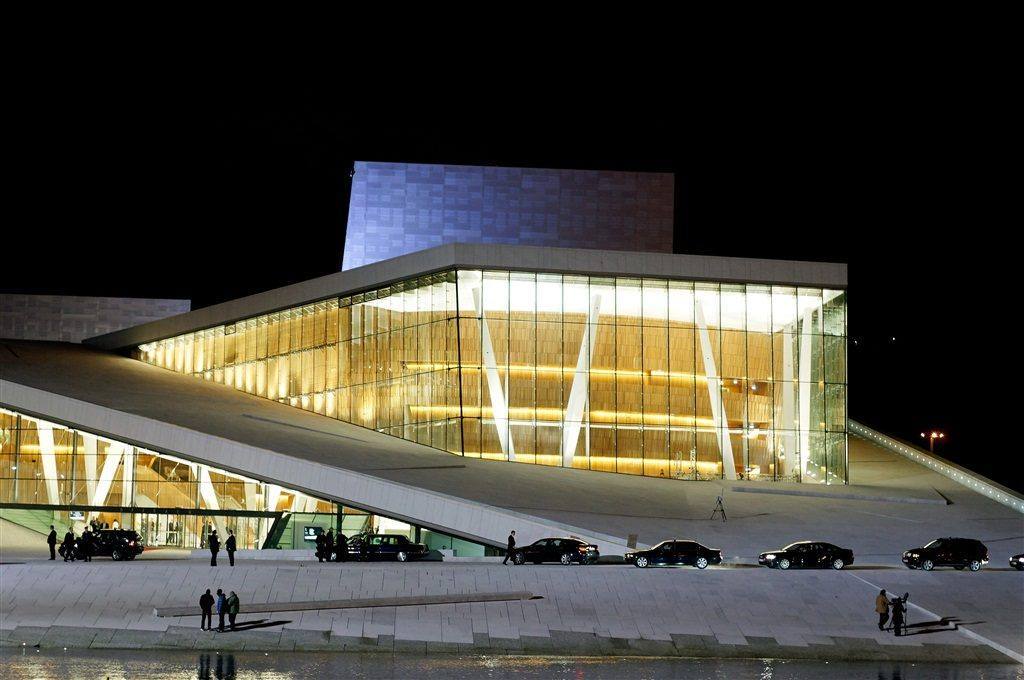 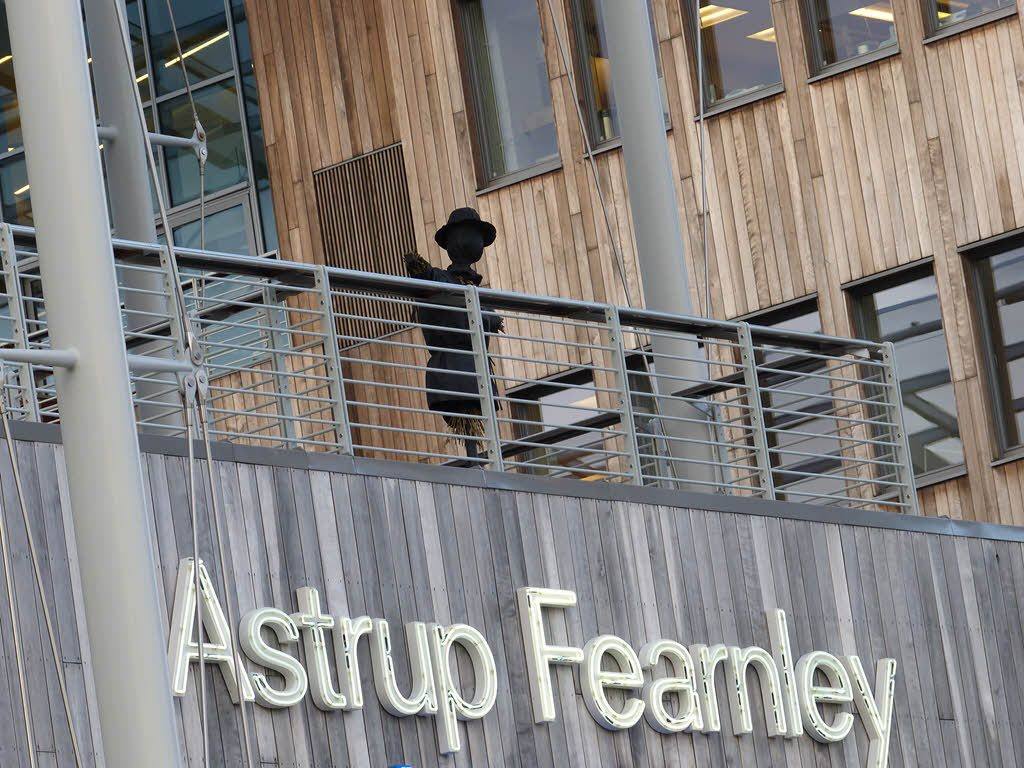 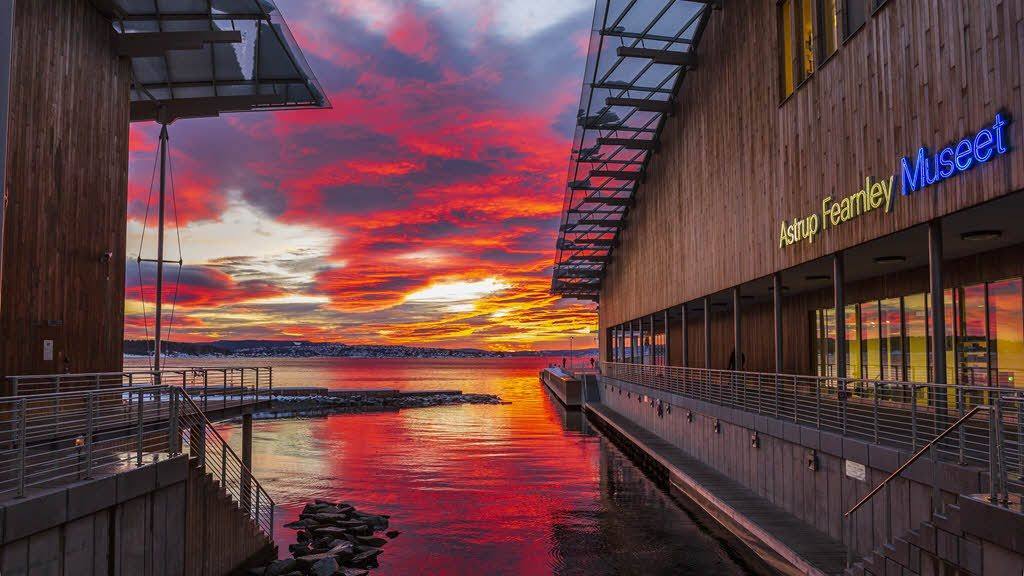